Wheel Alignments Near Me 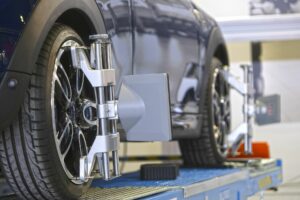 WHAT IS CAMBER, TOE, CASTER, AND OFFSET?
We at Platinum Plus Auto Repair know that Maintaining proper alignment is fundamental to preserving both your car’s safety and its tread life. Wheel alignments ensure that all four wheels are consistent with each other and are optimized for maximum contact with the surface of the road. The way a wheel is oriented on your car is broken down to three major components; camber, caster, and toe.

Camber
The most widely discussed and controversial of the three elements is camber. Camber angle is the measure in degrees of the difference between the wheels vertical alignment perpendicular to the surface. If a wheel is perfectly perpendicular to the surface, its camber would be 0 degrees. Camber is described as negative when the top of the tires begin to tilt inward towards the fender wells. Consequently, when the top of the tires begin to tilt away from the vehicle it is considered positive.
Negative camber is becoming increasingly more popular because of its visual appeal. The real advantages to negative camber are seen in the handling characteristics. An aggressive driver will enjoy the benefits of increased grip during heavy cornering with negative camber. During straight acceleration however, negative camber will reduce the contact surface between the tires and road surface.
Regrettably, negative camber generates what is referred to as camber thrust. When both tires are angled negatively they push against each other, which is fine as long as both tires are in contact with the road surface. When one tire loses grip, the other tire no longer has an opposing force being applied to it and as a result the vehicle is thrust towards the wheel with no traction.
Zero camber will result in more even tire wear over time, but may rob performance during cornering. Ultimately, optimal camber will depend upon your driving style and conditions the vehicle is being driven in.

Caster
Caster is a bit harder to conceptualize, but it’s defined as the angle created by the steerings pivot point from the front to back of the vehicle. Caster is positive if the line is angled forward, and negative if backward.
Typically, positive caster will make the vehicle more stable at high speeds, and will increase tire lean when cornering. This can also increase steering effort as well.
Most road vehicles have what is called cross-caster. Cross castered vehicles have slightly different caster and camber, which cause it to drift slightly to the right while rolling. This is a safety feature so that un-manned vehicles or drivers who lose steering control will drift toward the side of the road instead of into oncoming traffic.

Toe
Perhaps the easiest concept to visualize is toe. Toe represents the angle derived from pointing the tires inward or outward from a top-down view – much like looking down at your toes and angling them inward or outward.
Correct toe is paramount to even tread wear and extended tire life. If the tires are pointed inward or outward, they will scrub against the surface of the road and cause wear along the edges. Sometimes however, tread life can be sacrificed for performance or stability
Positive toe occurs when the front of both tires begins to face each other. Positive toe permits both wheels to constantly generate force against one another, which reduces turning ability. However, positive tow creates straighter driving characteristics.
Typically, rear wheel drive vehicles have slightly positive tow in the rear due to rolling resistance – causing outward drag in the suspension arms. The slight positive toe straightens out the wheels at speed, effectively evening them out and preventing excessive tire wear.
Negative toe is often used in front wheel drive vehicles for the opposite reason. Their suspension arms pull slightly inward, so a slight negative toe will compensate for the drag and level out the wheels at speed.
Negative toe increases a cars cornering ability. When the vehicle begins to turn inward towards a corner, the inner wheel will be angled more aggressively. Since its turning radius is smaller than the outer wheel due to the angle, it will pull the car in that direction.
Negative toe decreases straight line stability as a result. Any slight change in direction will cause the car to hint towards one direction or the other.

Vehicles are designed with manufacturer’s settings for a reason. Countless hours of research and development go into designing suspension components and typically those numbers are the best to go with. Attempting to differ from the norm may result in dangerous conditions, especially for public road vehicles.