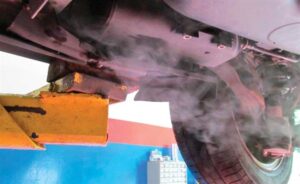 What’s a smoke test you ask?

An EVAP smoke test procedure usually entails a technician clamping the end of the EVAP hose that leads to the charcoal canister and applies pressure on the gas tank using nitrogen via the EVAP test device.

It may be due to a faulty computerized engine control, carburetor, or fuel injection unit

Defective ignition system. This means that during an HC check, the analyzer detects high Hydrocarbons. If the vehicle is not properly maintained then expect to have an ignition system that is defective causing it to fail an emissions test. The most common causes of high HC are defective spark plugs wires, worn out spark plugs, over advanced ignition timing or a worn out distributor cap

Leaks in the vehicle’s vacuum. Vacuum leaks are another common reason for an emissions test failure. A vacuum leak is often caused by the MAP sensor not working properly. The MAP sensor measures the load of an internal combustion of the engine’s electronic control system. Leaks may be found in the gaskets or vacuum lines of the Rich fuel mixture. High CO2levels are often caused by high carbon monoxide levels due to a weak ignition or a rich air/fuel mixture. There are numerous causes of a rich fuel mixture. A contaminated oxygen sensor, leaky injectors, and excessive fuel pressure are some common causes of richness to the mixture.

Some of the more common causes of a faulty EVAP include leaks in the vacuum hoses and vents, defective purge valves, or faulty gas caps.